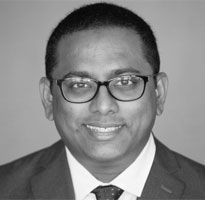 Ranjeet Shetye is among the few people who grew up devouring science fiction and then made a career at the intersection of technology and the future. From his base in Austin, Texas, Ranjeet has been associated with YourNest since 2016 as an investor and has been an integral part of the startup eco-system in USA and India for many years now. He became a Venture Partner in early 2021 and is currently returning to India.

As a Computer Science Engineer from the University of Mumbai with a Master’s Degree in the same field from the University of Southern California, Ranjeet has had a multi-disciplinary career across technology and leadership roles in DeepTech, including Security, Cloud, Crypto, Networking and allied domains. Startups in which he held pivotal roles were later acquired by companies like Alcatel, Cisco and Marvell.

Currently, the COO and VP of an AI/ML startup in stealth mode, Ranjeet’s experiences span a diverse set of firms in several domains: Resilinc, CALY Networks, PicoMobile (acquired by Marvell) and Cisco (Airespace). His roles in these companies began with technology but evolved into working closely on startup buyouts, meeting post-acquisition milestones, and customer management – in enterprise sales, recovery and resolving crises. Consequently, he takes pride in being “Marinated in a pro-consumer culture”.