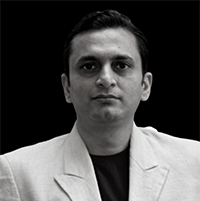 “The ordinary guy with extraordinary dreams” is what best describes Ketan. From being a kid who was ordinary by birth, was found clapping for others, he continued to dream big.

Having authored a book, he is now amongst 2% of the world’s population. For someone who has been born ordinary, he finds this achievement exciting.

Ketan enjoys enabling business leaders in their journey to build organisations. After completing his Post Graduation from MDI Gurgaon, he started his career with Aditya Birla Group in 2006. He was assigned the Retail business that was at its concept stage in the year 2006. The company grew to various stores across India. Within a few years of operations, it was already a 12,000+ people organisation. Post this assignment, he took on the challenge to build people’s practice at Utsav Fashion. This company had the dream to go global. Post Utsav, Ketan took up an assignment with IDFC First Bank. He was leading the HR function for the Rural and Retail Asset businesses. At IDFC, he was part of the business expansion phase where they scaled up from 500 to 5000 people in just two years. Right now, Ketan takes care of People Function for a young startup – Rentomojo, the market leader in the rental ecosystem.

He loves technology and is bullish on the future of HR Tech. He believes that the HR function of the future would be a lot like that of Product Management; you understand technology, understand business, and design products that work. This belief led to him getting on to the advisory board of a few HR Tech companies.

Having undergone transformations in his life when working with a coach, he believes in the power of Coaching. He is himself a Life & Career Coach.

Not many years ago, Ketan used to have low confidence and mental blocks when speaking in public forums. He overcame them again through the power of Coaching. He also works as a Personal Growth Coach for people who face a similar challenge!

A petro head, Ketan believes that Ordinary by birth is a chance; living ordinary is a choice.