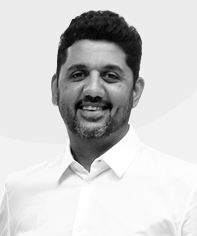 Amrish Rau is the CEO of Pine Labs. He leads the company’s growth and expansion in Asia and beyond. He has over two decades’ experience in the FinTech space, having run his own startup and built large organizations.

Prior to Pine Labs, Amrish co-founded Citrus Pay which was acquired by Naspers FinTech, PayU in 2016. Post the acquisition, he was made the CEO for PayU India and later took over as head of Investments for Naspers where he was responsible for increasing the company’s footprint in the financial technology sector.

Amrish started his FinTech journey with First Data Corporation in 2005. Later, as Managing Director for First Data Asia he helped build a market leading payments joint venture with ICICI Bank. As CEO of First Data MS Asia, he was responsible for all operations in the South and South East Asia markets. Prior to First Data, Amrish spent eight years with NCR Corporation where he started in business development and went on to head the company’s data warehousing and CRM division, Teradata, as Managing Director.