National Investment and Infrastructure Fund (NIIF) has made a Limited Partner (LP) commitment to YourNest Venture Capital’s latest fund that will make it the Indian sovereign fund’s first bet on a venture capital fund.

A Limited Partner is an investor in a venture capital or a private equity fund.

“As an anchor investor, we expect our portfolio companies can benefit and get participation from other NIIF sponsored funds. NIIF’s participation also broadens the institutional LP base of our fund and will build the culture and processes for an ESG framework,” explained Goyal.

NIIF did not immediately respond to a request for comment.

YourNest Venture Capital has already raised $50 million in commitments for its latest fund and will continue to invest in intellectual property based tech companies in the realm of software, hardware products and internet of things, Goyal said.

The third fund will be able to make larger follow-on investments, but will otherwise stick with the investment strategy of the first two funds, he said.

YourNest’s first fund – which had a corpus of Rs 90 crore and invested in 16 companies — has made four ‘handsome exits’ and is still sitting on four companies that it is waiting to exit.

Some of YourNest better exits from the first fund include sale of Momspresso to Mamaearth in December 2021 as well as boAt’s acquisition of YourNest portfolio firm Cove IoT in January this year.

Out of the first fund, eight companies exited in a ‘fire sale’, Goyal said.

The Rs 90 crore fund 1 has already returned Rs 130 crore to its investors, and is scheduled to return 3.5X to 4X back to its investors at the end of its tenure, he said.

YourNest’s second fund – which closed at Rs 215 crore or $30 million – has made one exit so far, after online fintech and tax platform Clear acquired Xpedize in March 2022.

“We have multiple “dragons” in this fund,” Goyal said, though he didn’t name them. In venture capital parlance, a ‘dragon’ can return an entire fund.

The third fund, which marked its first close in September 2021, has already issued four term sheets, though Goyal did not name any of the investments. 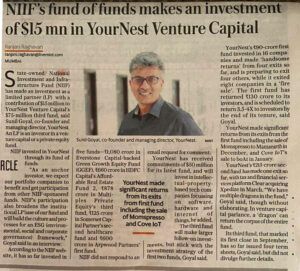